The road leading to Sanford Winery is a beautiful one.  As we drove in from our hotel, we enjoyed the scenic views of rolling hills, farmland and, of course, vineyards.  We were the first to arrive for the day and Daniel kindly greeted us at the door.  He wasted no time in pouring us their Sanford & Benedict Estate Viognier as he started talking about the history of the winery.  (Photo of entrance courtesy of Sanford.)

Sanford had its beginning in the late 1960s when Richard Sanford met Michael Benedict at the Santa Barbara Sailing Center.  Benedict was a botanist who spent his time studying climate and how climate influenced the distribution of plants in the world.  After building a friendship, and having a shared interest in wine, Sanford and Benedict decided to partner up and start their search for the perfect place to start their vineyard.  They drove up and down the coast with a thermometer outside the car window in pursuit of the perfect spot for climate, soil and terrain.  Their search paid off when they found a plot of land for sale that checked all those boxes.  Story goes, the land owner had purchased a house on a piece of property along with the surrounding land.  He had a hunch it would one day be lakefront property, predicting the Santa Barbara watershed would be building a dam to the west of his property. Unfortunately, his hunch was wrong and the dam was built to the east.  Realizing his land wasn’t going to have the value he hoped for, he put it up for sale.  Sanford and Benedict founded the Sanford & Benedict Vineyard in 1971, with their first vines being planted in 1972.  It is considered the oldest vineyard in the Santa Rita Hills and was the first to plant Pinot Noir.  In 2001, Sanford helped establish the Santa Rita Hills AVA.  To this day they have 260 acres under vine, produce approximately 20,000 cases per year, and take pride in being a 100% sustainable vineyard. 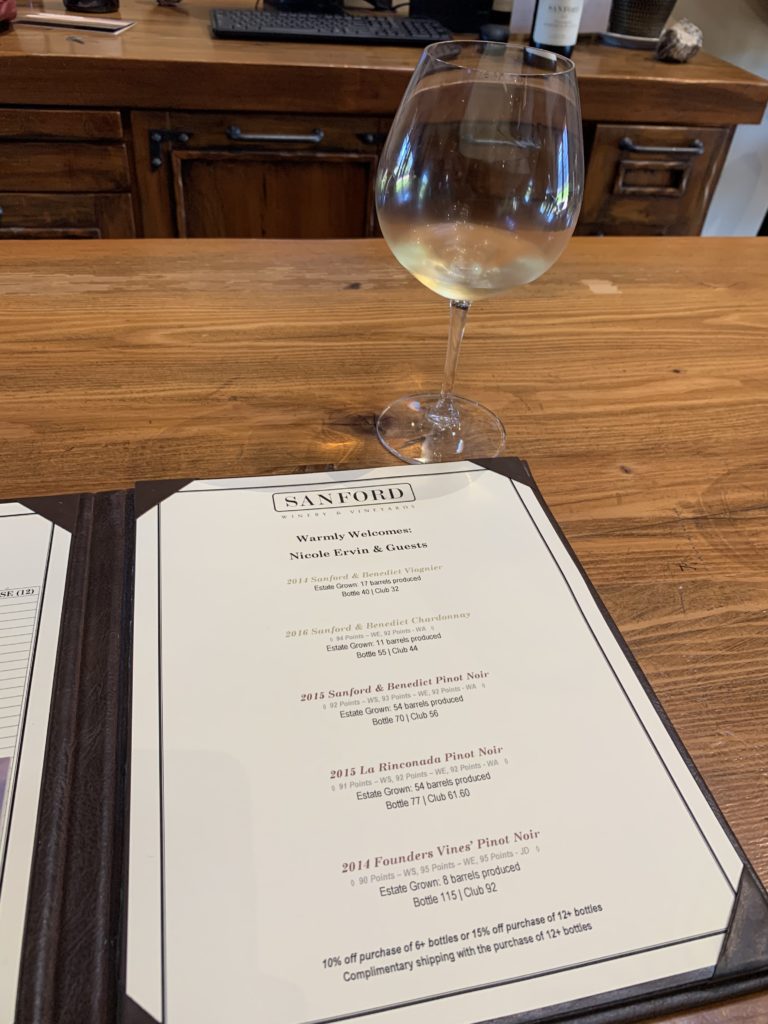 After finishing the Viognier, we then moved onto their Sanford & Benedict Estate Chardonnay.  Their Chardonnays are typical of the Santa Rita Hills, having more citrus elements like lemon, with a hint of oak and butter on the palate and nose.  These Chardonnays are quite the contrary to the stereotypical California Chardonnay you would find elsewhere in the state.  Eighty percent of their Chardonnay comes from the La Rinconada vineyard, aka the flatlands, however, we were lucky and got to try some Chardonnay that was grown from the Sanford & Benedict vineyard. 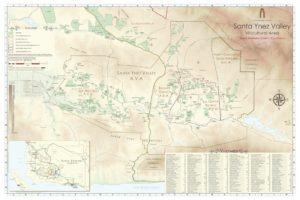 Daniel also shared some background information on the Santa Rita Hills AVA and how it came to be.  In 1997, a petition was started by local winemakers wanting an AVA for their region.  Four years later, in 2001, they were finally granted AVA status.  The total area encompasses about 30,000 acres.  Pinot Noir has the lion’s share with 3,000 acres, Chardonnay has about 500, and various other varietals have about 150.  The vast majority of the region being Pinot Noir can be credited to Sanford & Benedict, as they were the first to plant this varietal.  The Santa Rita Hills AVA is tied with Russian River for the coldest growing region in the state of California.  With a location about 10 miles as the crow flies from the ocean, coupled with the transverse mountain ranges, it makes for the perfect climate:  just enough warmth to ripen the Burgundian varietals, yet cool enough for them to thrive.  You’ll notice it is quite breezy when you visit the winery.  This is caused by the hot air being trapped in the Lake Cachuma area, which creates a differential in the air pressure, therefore cool air off the ocean starts getting sucked in.  The hottest it will get in this area is about 85 degrees in the summertime, which is vastly different from the Happy Canyon AVA where Santa Barbara grows its Cabernet Sauvignon.  Temperatures in this region have a wide variance between daytime highs and nighttime lows. (map courtesy of sbcountywines.com)

As we finished our Chardonnay, Daniel told us about the La Rinconada land.  Wanting to increase production, it was purchased in 1996 and they planted the vines in 1997.  They currently have 1,100 acres with 260 acres of planted vineyards, which yield about 20,000 cases annually.  Most of the hillside was donated to a Santa Barbara land trust to ensure it for a wildlife preserve.

Daniel then took us outside to show us some of the dormant Pinot Noir vines in the La Rinconada vineyard.  Huxley, the winemaker’s dog, joined us here and graciously accompanied us for the remainder of our tour.  The westerly wind was already blowing and we experienced firsthand what Daniel was talking about earlier in the tasting room.  Although there were no green leaves on the vineyards, we could see a nice splash of green growing in between the vines as the cover crops are beginning to sprout.  This is how they reintroduce nutrients into the soil since rotating crops isn’t an option.  They also have windmills in the vineyards which serve for frost protection by circulating warm air, which minimizes frost from settling on the vines.  This is particularly beneficial during the winter months when they experience cooler temperatures.  The land on the La Rinconada property is different from the land on the Sanford & Benedict property in that it has alluvial soil coming from the Santa Ynez River.  About 150 years ago the river was channeled out so the property could be used as farmland.  The Sanford & Benedict soil is full of more natural elements like shale and limestone, making two distinct soil properties on site, each influencing the wine in a different way.  Because of these soil differences, the winemaker and vineyard manager decided to grow most of the Chardonnay on the La Rinconada side, and most of the Pinot Noir is on the Sanford & Benedict side.  While outside, we got to try the Sanford & Benedict Pinot Noir, which is a five-block blend.  The wine was very full bodied and fruit forward, which is typical for a Pinot from this area. 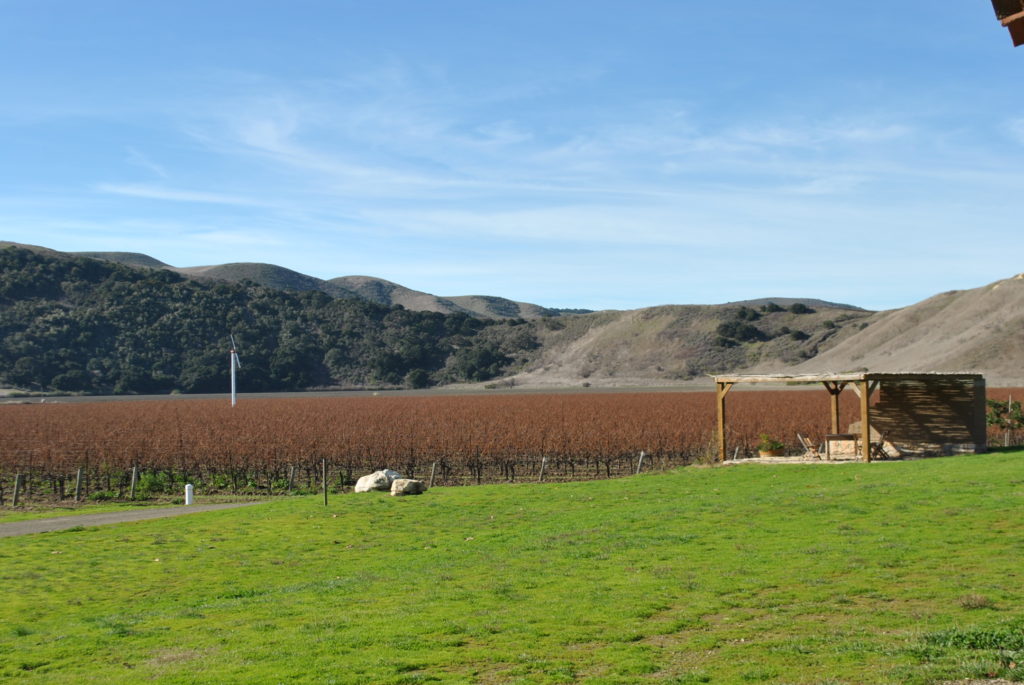 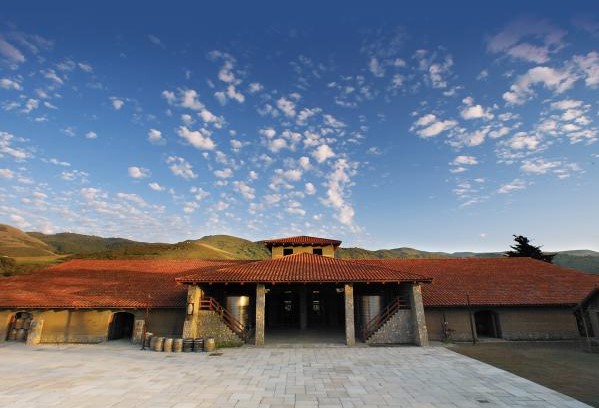 Daniel then took us to their production courtyard.  He shared that these buildings were built in 2001 and the tasting room was built in 2007.  Their goal in building each of these structures was to use as much of the natural materials reclaimed while keeping with a California mission style.  All of the walls are built with adobe brick produced from the soil on site.  They even hired a skilled craftsman from Mexico to teach them how to construct an adobe-type building in the proper way.  There were over 100,000 bricks used in the construction of this property, making it the largest construction using the adobe-style since the missions were built.  The roof tiles were made from natural materials in Mexico, the rocks were sourced from the Santa Ynez River, and the wood was old growth Douglas Fir from Washington.  (Photo of production courtyard courtesy of Sanford.) 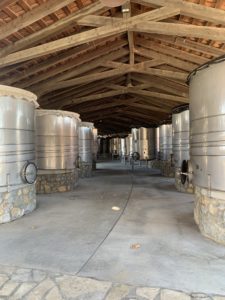 The crush pad was our next stop on the tour, this is where harvest starts.  Chardonnay and Viognier are brought in first since it reaches the sugar levels faster than the Pinot Nior.  A refractometer will be used to test the sugar levels (23% brix for you wine nerds) to ensure the 13.0-13.5% alcohol content.  The harvested crops then get put into a bladder press, stems and leaves too, and the pressed juice comes out the bottom.  From there, the juice is put in holding tanks for 48 hours where it is then racked.  Across from the bladder press is the destemmer, which is used for the Pinot Noir.  There are no whole cluster presses on their reds.  By using their leaves and stems elsewhere as apart of compost, they take pride in being a 100% sustainable vineyard.  After the Pinot Noir is pressed, it is sent to their outside fermentation tanks for 10-18 days.  Here the yeast is added, which starts to eat the sugar in the grapes, creating ethanol and carbon dioxide byproducts.  The carbon dioxide works as a raising agent for all the grape solids (skins and seeds), meaning they come to the top.  These solids are where the flavors primarily come from in the wine, so a punch down must occur 2-3 times per day to ensure the juice stays mixed.  The outdoor method they use is unique.  They designed a system that takes advantage of the constant breezy conditions to blow off the carbon dioxide.  With Mother Nature acting as the ventilation system, so to speak, they are able to keep their crew safe, while eliminating the need for an installed system.  Each fermentation tank is encased with a glycol jacket to help ensure the wine doesn’t get too warm during fermentation. 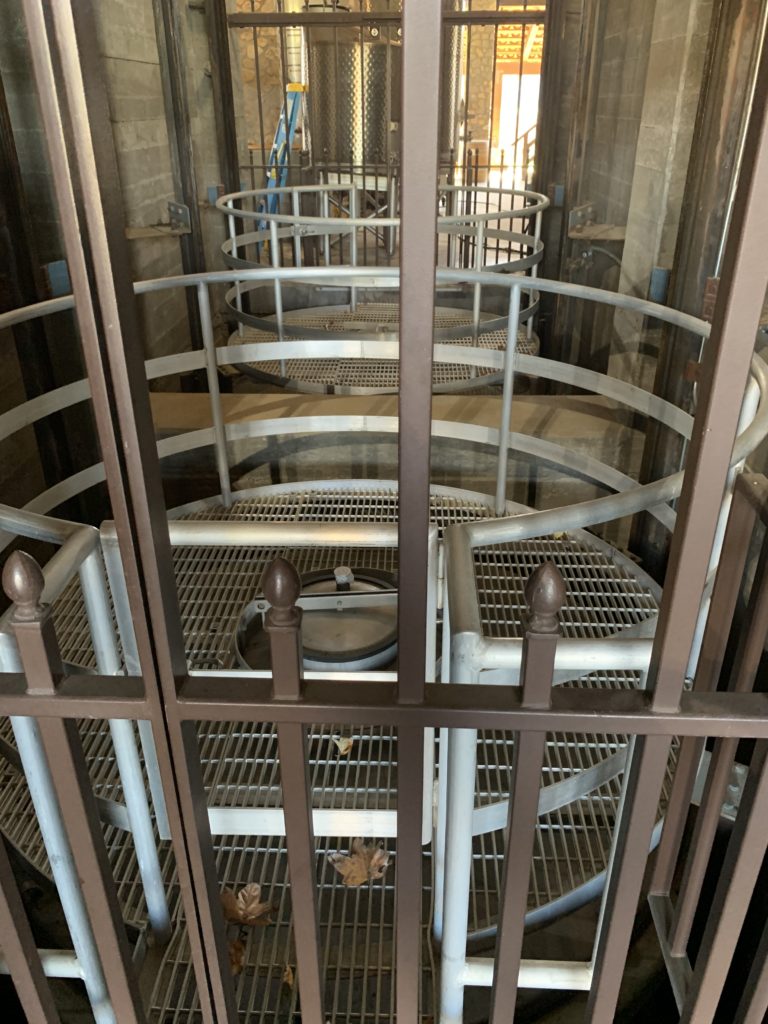 As we arrived at the true production facility, Daniel served us the La Rinconada Estate Pinot Noir.  The nose on this one was very different from the first Pinot we had in that there were more earthy notes.  In the production facility they have massive holding tanks for the Chardonnay.  The temperature is held at 45 degrees Fahrenheit for 48 hours to allow for any solids to settle, so it can be filtered, racked, and put it into barrel.  This is where the Chardonnay begins its fermentation process.  One unique thing they have in the production facility is an elevator lift for the 3,650-gallon tanks.  The lift allows them to easily move the tanks up and down for ease of transferring wines around with the gravity flow method rather than using forced air with pumps.  This is a less-disruptive process for gentle varietals like Pinot Noir and Chardonnay. 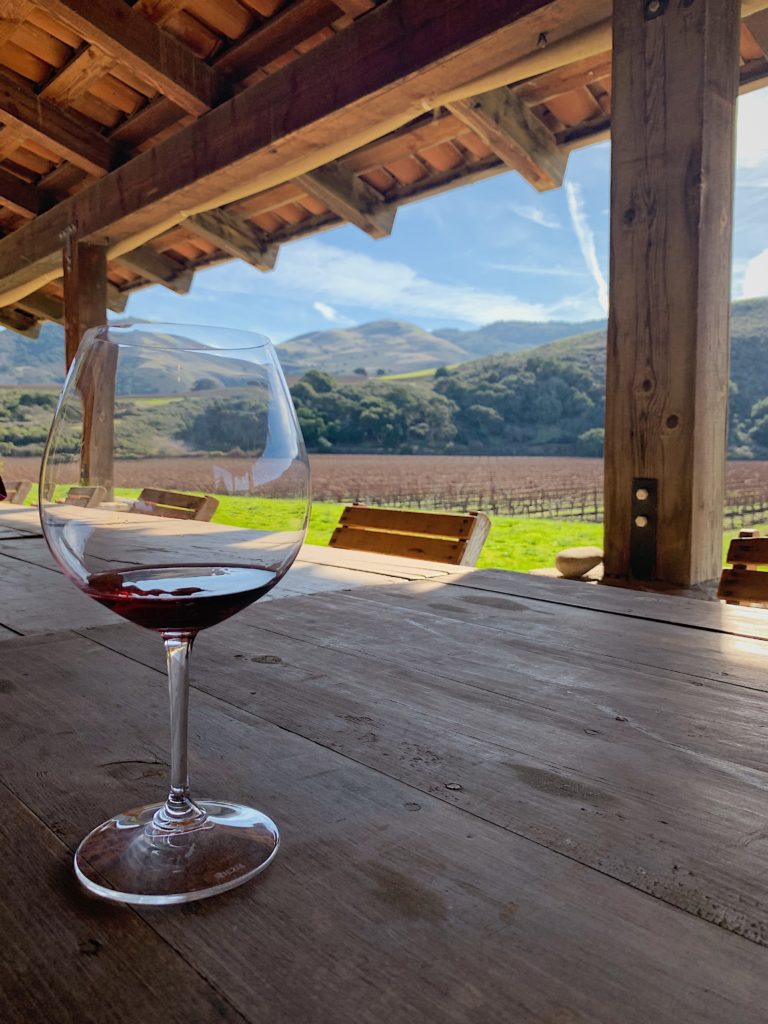 Behind the production facility is the south patio which hosts many corporate and member events, as well as weddings.  There is a large table with a stunning view of a sea of Chardonnay grapevines on a rolling hillside backdrop.  The last part of our tour Daniel took us to the west cellar, this is where all of their Pinot Noir is held.  The east cellar across the way is where they store all of their Chardonnay.  Each cellar can hold a maximum of 1,000 barrels, all of which are French oak.  We were glad we had our jackets on because the temperature inside the cellar fluctuates between 57 and 60 degrees Fahrenheit.  The cellar is also used to host events and has a large table surrounded by the barrels.  While in the cellar, Daniel served us the Founders’ Vines Pinot Noir.  These vines are unique in that they were planted on their own roots and were not grafted onto American root stalk, which is very rare.  Benedict was good friends with Karl Wente, who is known for Wente Winery in Livermore.  Wente got vines from Paul Mesone, another wine pioneer, and he brought these Pinot Noir vines back from France in the 1960s as suitcase clippings.  Because of this, they don’t know what the clone is exactly. 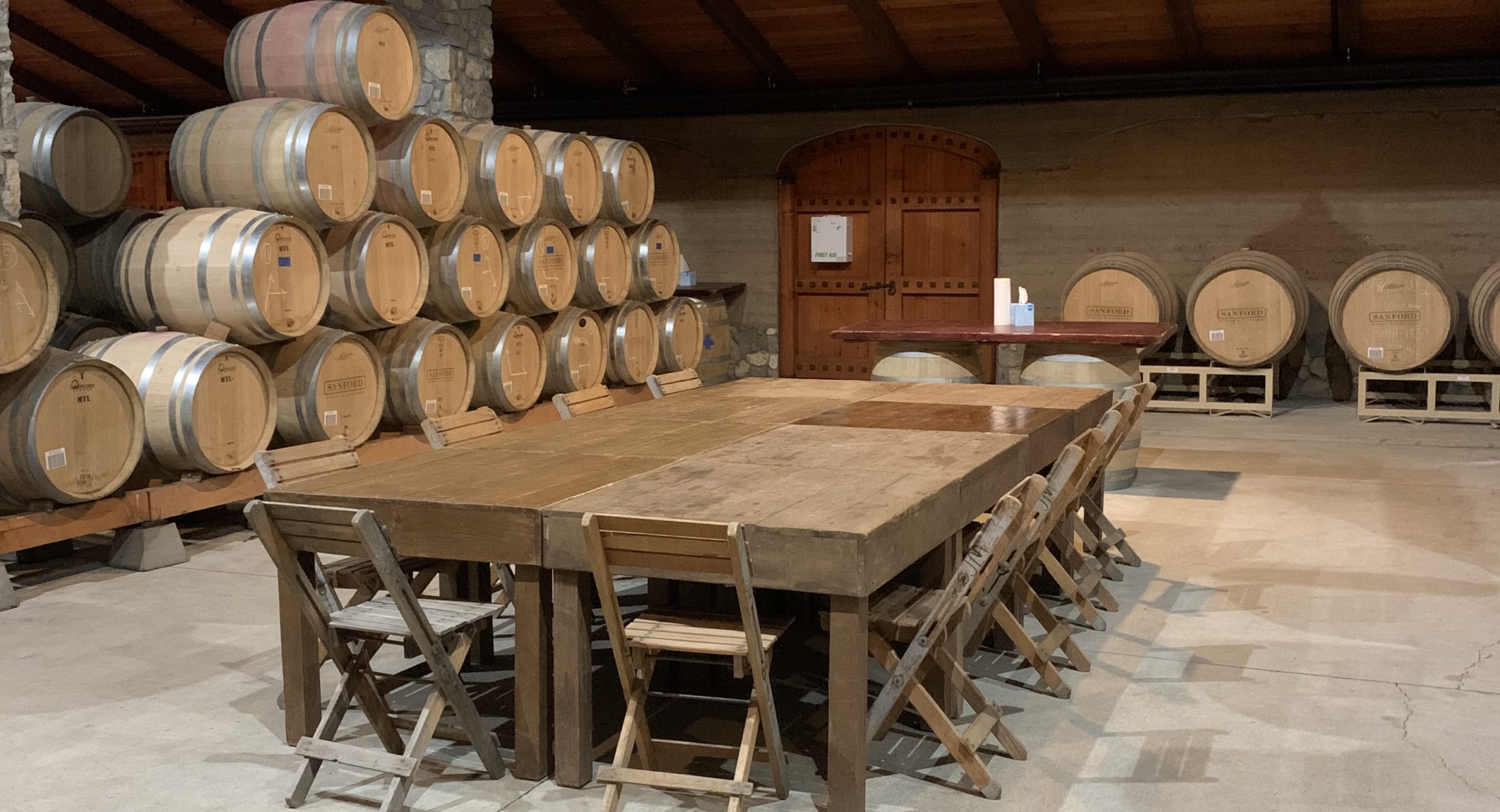 Toward the end our visit at Sanford, Daniel gave us a surprise pour of their estate grown Brut Cuvée.  This was crisp and refreshing and the perfect way to conclude our tasting.  He mentioned that although they currently have other varietals for sale, such as Syrah and Sauvignon Blanc, they are currently in transition to being entirely estate grown and will no longer have these other varietals.

The next time you’re in Lompoc or are looking for an excuse to get yourself to wine country, be sure to stop at Sanford to do the “Vista” Tasting & Tour.  The tour is by appointment only and requires a minimum of 24 hours’ notice.  I would suggest budgeting about an hour for this tour as it’s easy to get caught up enjoying the view and asking questions.  Below is a link to how you can book your experience.  Cheers fellow wine lovers and, as always, I hope this inspires you to visit the central coast for some wine tasting! 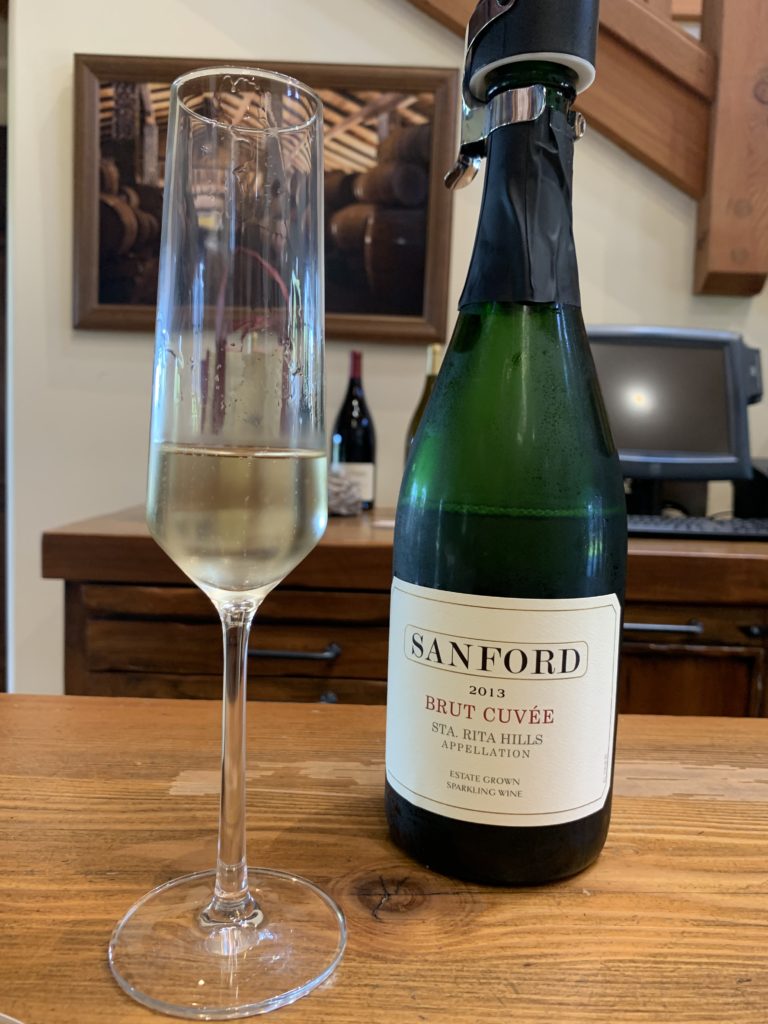