It’s no secret, I’ve always been a big fan of wine tasting.  It’s more than just sipping delicious wine; it’s a meaningful learning experience about the winery, the winemaker and what makes that bottle special.  And when you get to learn this information directly from the winemaker, that’s an added bonus.  Lucky for me, I recently got to enjoy such an experience, and from the convenience of my home.  In this blog post I want to share with you a virtual tasting I helped put together with Four Lanterns Vineyard and Winery, out of Paso Robles, California.  Steve and Jackie Gleason, the husband and wife team behind Four Lanterns, led us through a flight of five wines, as well as talking about the history of the winery.  This was especially enjoyable for me because everyone on our Zoom call was my friend or family member, so we had a very casual and fun time, almost as if we were at the winery together in person.

Prior to our call, I worked with Lisa, an employee at Four Lanterns, to put together the perfect kit for my group.  Given that I knew we had a mixture of white and red wine lovers in my group, we agreed on doing two white and three red wines, and Lisa selected the ones she felt best represented the winery.  A few days prior to the tasting, I was excited to receive an email saying the wine kit had shipped, along with detailed instructions on how to care for the wine once it arrived.  The email also included charcuterie pairings for each wine, so, of course, I had to put together a delicious board for us to enjoy during the Zoom call.  The wines arrived on schedule, a few days before our tasting and in perfect condition.  All that was left to do was patiently wait to enjoy the wines! 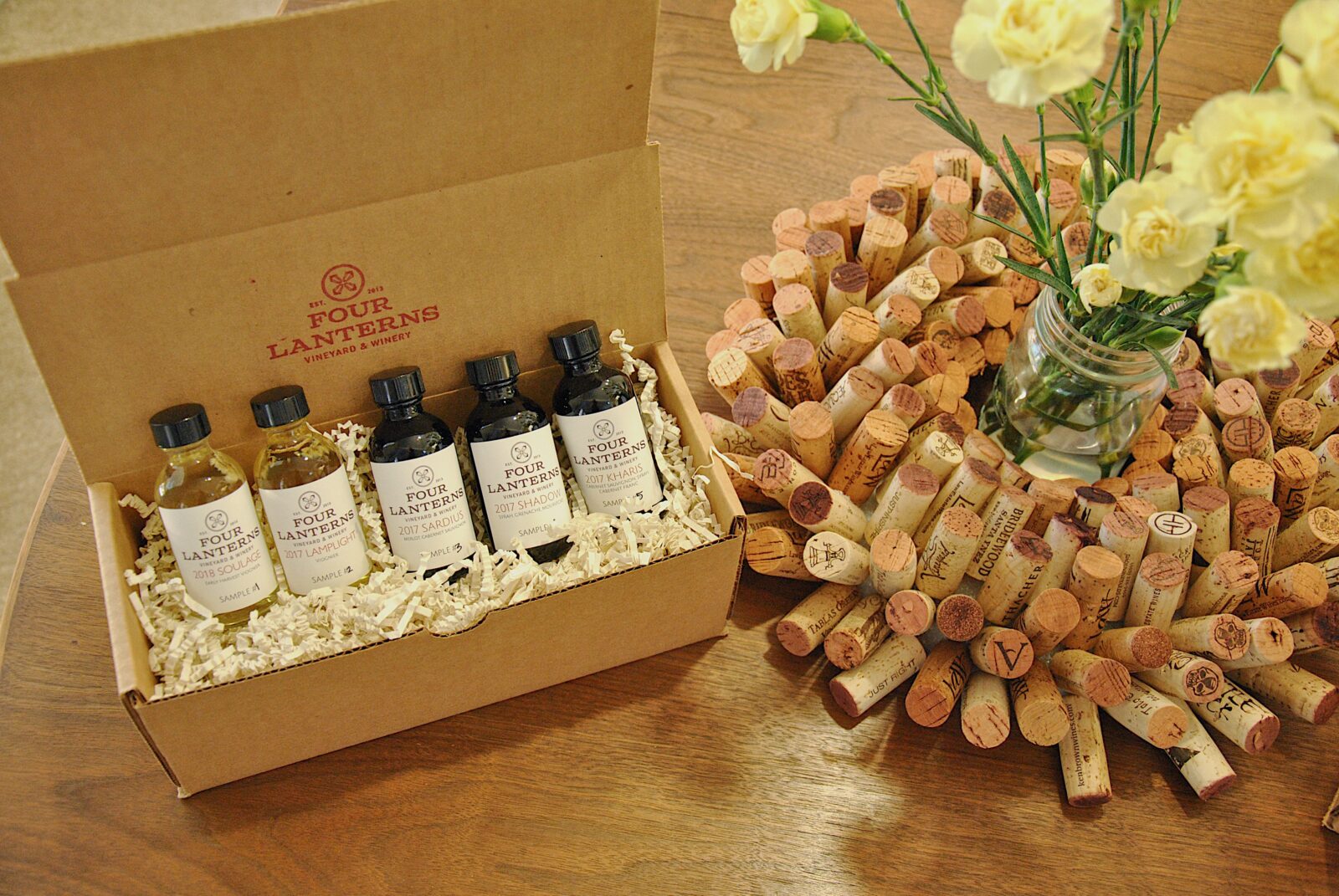 Finally, the tasting day arrived.  I pulled out the wines, assembled the charcuterie board, and got my iPad ready for our Zoom call.  Steve and Jackie were great hosts and wasted no time diving into the first wine, a 2018 Soulage.  Their Soulage is an early harvest Viognier, which was intriguing to me as I had never had a Viognier that was early harvest.  I loved that they then had us pour the next white wine, a 2017 Lamplight, into a second glass to compare.  This was also a Viognier, but not an early harvest.  It was fascinating to smell and taste the differences between these two wines.  My inner wine nerd was loving this comparison.  The side-by-side pour really illustrated how the timing of the grape harvest affects the wine’s flavor profile. 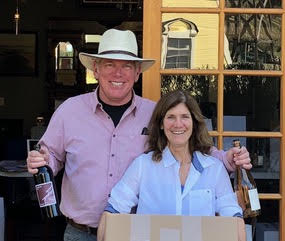 Given that we had some full glasses to sip on, and we also had some yummy pairings to start enjoying, Steve and Jackie began going over the history of the winery and how they came to be involved in the wine world.  Steve, with 30 years in institutional money management, and Jackie, who was in physical therapy and healthcare management before transitioning to a stay-at-home mom, decided it was time for a change.  They took their love of wine, the area, and a leap of faith to start a new life chapter when Steve found his dream property in Paso.  As Jackie recounted, when Steve called to tell her about his find, she said she could hear the excitement in his voice and knew this would be “the” property, and agreed they should purchase it.  In 2014, Four Lanterns opened their tasting room, and in 2015, the construction of their state-of-the-art production facility was complete. Having a production facility allowed them to have their wines be estate grown and produced.  As for how the winery got its name, Four Lanterns was inspired by Steve and Jackie’s four daughters, who also helped design the initial labels with Steve. 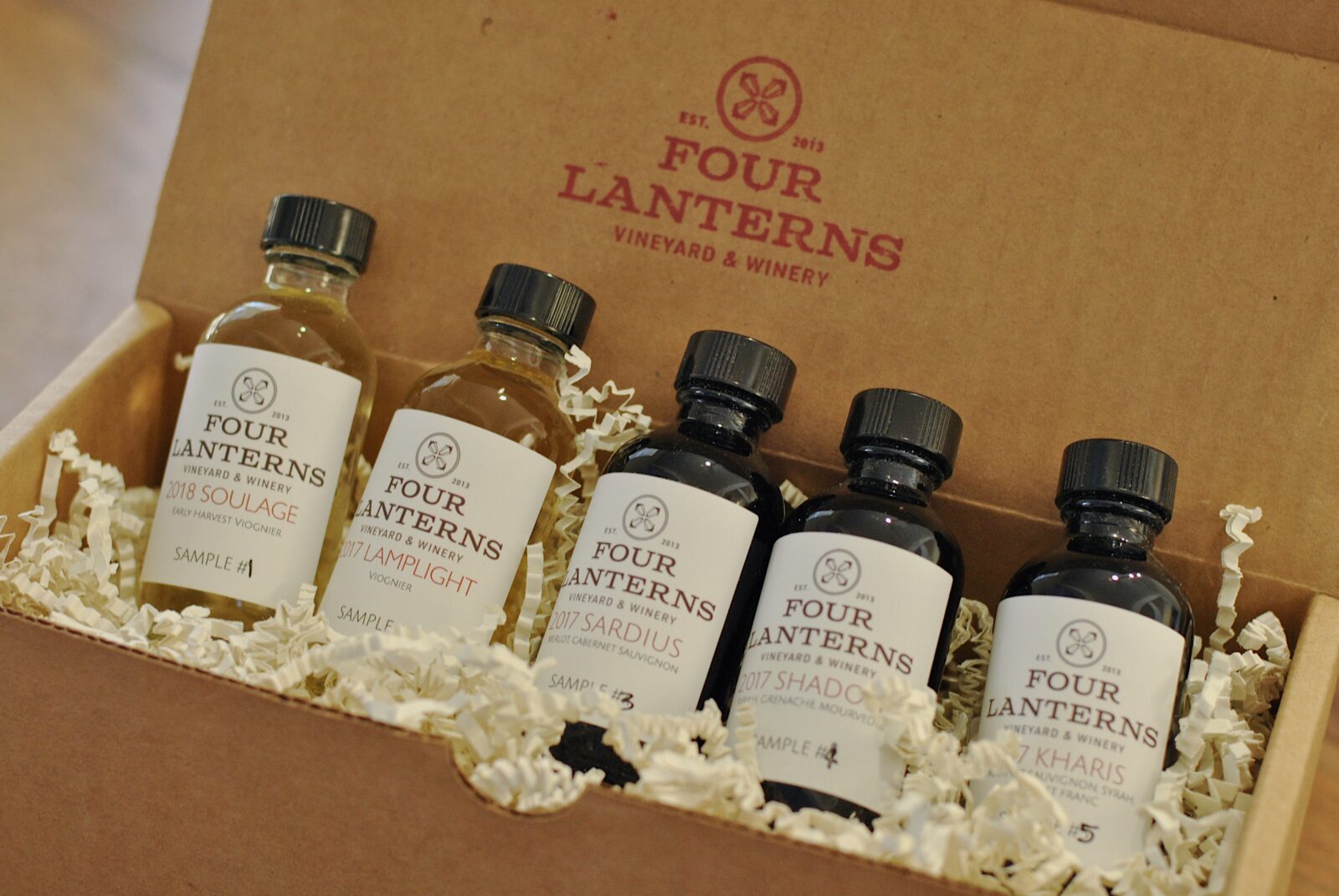 Proceeding on with the tasting, we jumped to the reds and tried their 2017 Sardius, which is a blend of 85% Merlot and 15% Cabernet Sauvignon.  At their suggestion, we paired this wine with Brie cheese and it was fantastic!  Actually, all the wine and cheese pairings they suggested for this tasting were spot on.  Each cheese nicely complemented the wine and brought out pleasant flavors in the wine.  The second red in the tasting was the 2017 Shadow, which is a blend of 45% Syrah, 36% Grenache and 19% Mourvèdre.  Last, but not least, was their 2017 Kharis, which is a blend of 45% Cabernet Sauvignon, 45% Syrah and 15% Cabernet Franc.  Being a big, bold red girl, this wine took the cake as being my favorite wine of the tasting, although I did enjoy each bottle for different reasons. 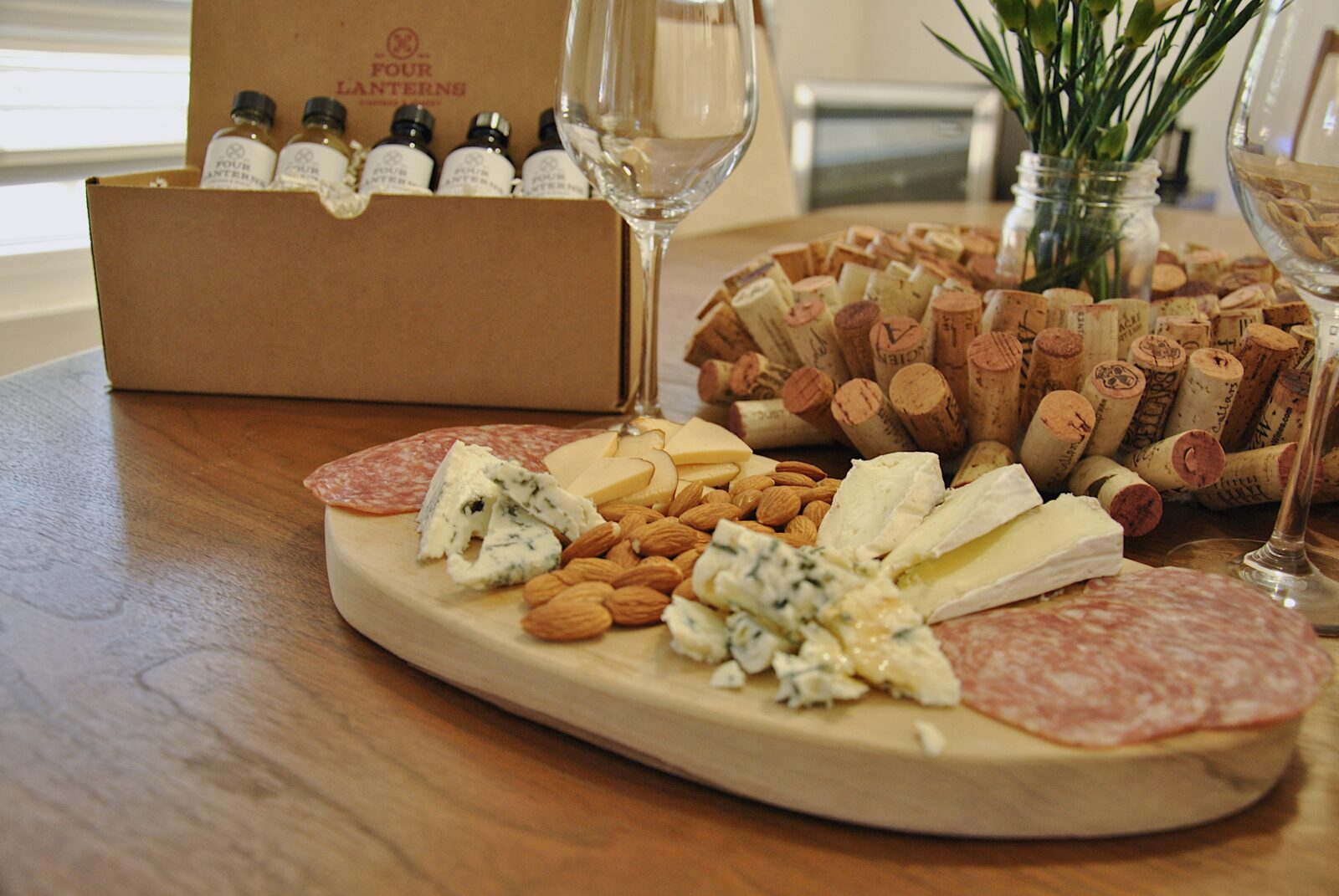 Before I knew it, it had been about an hour and our time was coming to a close.  Thankfully, after we wrapped up, I still had some wine left to sip and lots of snacks to enjoy while I mulled over everything I had just learned.  I want to thank the team at Four Lanterns for helping me put this Zoom event together.  Kudos to Lisa for her wine selections for my group, they were perfect.  And a big thank you to Steve and Jackie for a wonderful virtual tasting.

With wineries currently back open for visitors, I cannot wait to visit their tasting room on my next Paso trip to try more of their wines and talk more with Lisa, Steve and Jackie.  Be sure to add them to your list of places to check out in Paso!  Below I've included a link to their website so you can try a virtual tasting like I did, order wine bottles and/or schedule an appointment for an in-person visit.  Until next time, keep those wine glasses full of central coast wine!